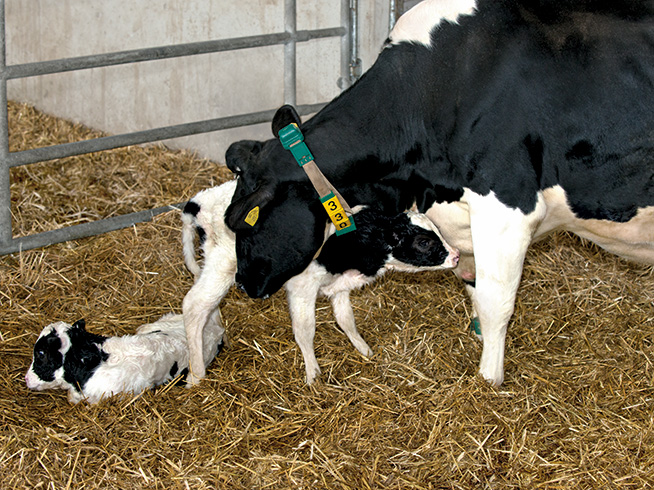 Introduction. Abrupt death of apparently healthy young calves is troubling and costly.  In many cases, there are no signs of anything wrong with the calf.  In the afternoon, the calf is fine; in the morning it’s dead.  One common condition thought to be responsible for acute death in calves, particularly milk-fed calves is Clostridium.  There are many different types of Clostridium organisms, including C. perfringens types A, B, C, D, and E, C. sordelli, and C. difficile, among others.  Most research literature indicates that C. perfringens types B and C are the most common cause of disease in young calves, although type A has also been reported.

What causes infection with Clostridium?  Clostridium are normally found in the intestines of cattle.  Usually, the disease occurs when a change allows the growth of these bacteria to increase dramatically.  Some factors associated with overgrowth of the gut with Clostridia include overeating, change in the weather, and poor digestibility of milk replacers.  Clostridia grow rapidly and produce specific “enterotoxins”, which are poisonous to the surrounding tissue.    The overgrowth of Clostridium and production of toxins can lead to the death of the calf.  There are four different types of toxins, but the “B” toxin appears to be the most important.  The “B”(or beta) toxin produces necrosis (destruction of intestinal tissue), decreases mobility of intestinal villi, and improves the ability of the bacteria to attach to the intestinal wall.

When does it occur?  Clostridium infections usually occur in young animals – particularly in calves less than two weeks of age, although it has been reported in calves up to two months of age.

What are the signs?  Unfortunately, in many cases, the only sign will be the death of the calf.  In some cases, severe dark bloody diarrhea will occur.  Other signs include abomasal bloat, depression, kicking at the belly (painful abdomen), and anorexia (off-feed).

Are there treatments?  Some reports indicate that large doses of penicillin have been effective in very early stages of the disease.  However, due to the acute onset of the disease, it is often too late to intervene.

Etiology of the disease.  Because Clostridia appear to be normal “inhabitants” of the environment and the animal, we need to focus on changes that occur in the animal that allow the overproduction of Clostridia in the gut (either the abomasum or intestine).  Given an optimal environment, growth of Clostridia will increase exponentially, producing toxins that can result in signs of the disease.  One important piece of evidence is the occurrence of the disease in very young calves.  There are a number of predisposing factors in young calves, including:

It is apparent from the list above that the development of the digestive “apparatus” of the animal plays an important role in the susceptibility of calves to the disease.  This may be particularly true if calves eat a large meal, or eat a meal very rapidly.  The relatively low production of acid in the abomasum and limited production of trypsin in the intestine, coupled with large amounts of milk or milk replacer raise the potential for rapid overgrowth by Clostridia.  One reason that young calves may be more susceptible is that the “B” toxin is digested by trypsin, which is a normal protein digesting enzyme in animals.  However, some young calves secrete little trypsin, which can allow the “B” toxin to escape digestion.

What can I do?  Clostridium diseases are frustrating and difficult, because there can be an outbreak of signs of the disease, followed by complete remission in a few days.  However, there are some management practices that can help reduce the risk of calves developing infections with Clostridia:

Vaccines are available for Clostridia species.  Many are recommended for treatment of the cow prior to calving.  The cow produces antibodies which are then passed into the colostrum.  Of course, it’s necessary that the calf actually consumes a sufficient amount of colostrum as soon as possible after birth.   Check with your veterinarian to determine if these are the right approach for your farm.  Many reports available in the literature and popular press indicate that these vaccines may not be particularly effective in promoting adequate colostral immunity in dry cows.  In a side note, the young Jersey calf cloned at the University of Tennessee died at nine months of age in 2001.  The necropsy report indicated that the calf died of an acute infection with C. perfringens.   It is of further interest that “Millie” had been vaccinated against C. perfringens.